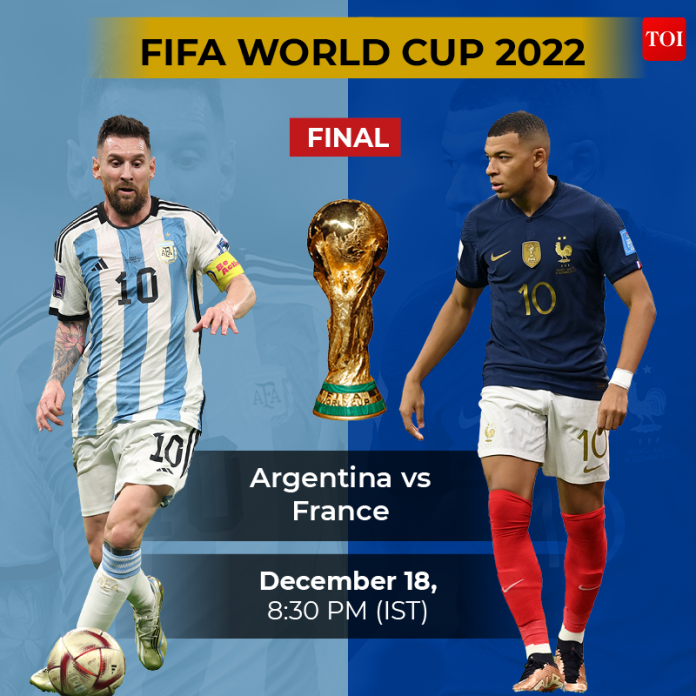 Lets talk about the level of excitement among the public for the FIFA World Cup 2022.

Argentina and France fans are relishing a date with destiny in Doha as the two heavyweight teams prepare to face off in search of a third World Cup on Sunday.

Anticipation is building outside the 88,000-plus-capacity Lusail Stadium as a dream final draws near.

Mbappe made 2 goals at FIFA World Cup 2022. He became 2nd person in the match who made hat-trick in goals by equalizing with the record made 56 yrs ago.

France forward Kylian Mbappe scored a hattrick against Argentina in the FIFA World Cup to win the Golden Boot at the Lusail Stadium in Qatar, on Sunday.

The Frenchman’s goal tally rose to eight goals in the tournament, surpassing Lionel Messi, both of whom went neck-to-neck in the competition for the boot.

Due to which after extra time score was 3-3 equal, here many times France tried to test Argentina and Messi by making goals but couldn’t succeed in doing so.

Here Argentina team members have already decided to give memorable farewell to Messi due to which after making goals in penalty shoot out won the match. This match lasted for 3 hrs .

Just a matter of minutes before lifting the World Cup trophy for the first time, following Argentina’s epic penalty shoot-out win over France, Messi received the Golden Ball awarded to the tournament’s best player. Here Argentina ,3rd time won the world cup trophy. By winning the trophy Argentina broke the chain of Europe of winning World Cup from past 20 yrs .