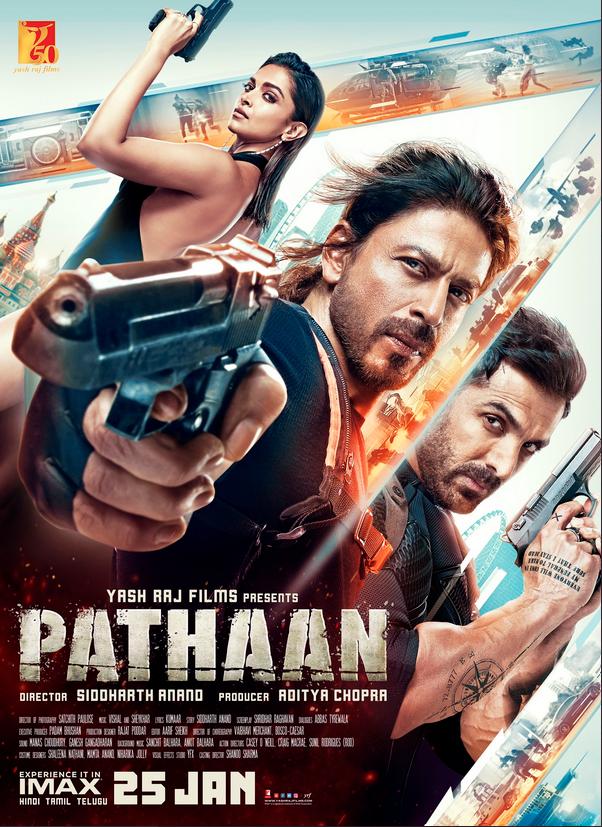 Pathaan is an upcoming Indian Hindi-language action thriller film directed by Siddharth Anand from a screenplay by Shridhar Raghavan and a story by Anand. Produced by Aditya Chopra for Yash Raj Films, it is the fourth installment in the YRF Spy Universe and stars Shah Rukh Khan, Deepika Padukone and John Abraham.

Pathaan is scheduled to be released in India on January 25, 2023, coinciding with Indian Republic Day weekend along with dubbed versions in Tamil and Telugu. Many posters has been made by fans .

The controversy over the upcoming Shah Rukh Khan and Deepika Padukone-starter film ‘Pathaan’ is yet to die down in Madhya Pradesh.
Amid rising demand to ban the film in theatres, the issue is likely to be discussed in the upcoming winter session of the Assembly scheduled to commence from Monday.
The controversy around ‘Pathaan’ was triggered after state Home Minister Narottam Mishra objected to a song from the film titled ‘Besharam Rang’, claiming that it hurt religious sentiments of the Hindu community. Mishra said the way the colours saffron and green have been used in the costumes used in the song is objectionable.

Boycott Pathaan trends on Twitter after release of SRK, Deepika Padukone’s ‘Besharam Rang’ song, public . Twitter is trending with ‘Boycott Pathaan’, and is flooded with people who are of the opinion that Bollywood has lost all its ideas. Some users on the platform are also comparing the upcoming film to Kantara. Some of the users demanding the boycott shared screenshots from the song wherein Deepika is wearing a saffron-coloured outfit and is held from the back by SRK.

Some fans are also supporting Shah Rukh Khan, while others asked unnecessary questions on twitter in order to irritate Shah Rukh Khan but he replied them in very polite way creating some humour .