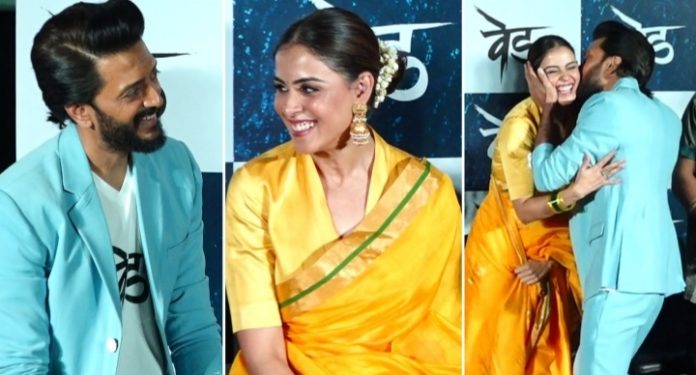 It feels like with the festive seasons, the season of movies has hold its grip back again. Films after films are getting on track.

One of the new upcoming hits is the movie “Ved” directed by Ritesh Deshmukh. This is a Marathi movie, featuring the most adorable and loved couple of B-town- Genelia and Ritesh.

The movie is a Romantic- comedy based on theme of love and heartbreak. Yesterday, the movie’s trailer was launched in Mumbai with the present of whole cast and crew of this movie.

Ritesh Deshmukh and Genelia looked obsessively good together. While Genelia gave a vibe of typical Maharashtrian woman with her yellow saree. Ritesh on the other hand attired in formal suit. Both of them complimented each other.

During the trailor launch, the couple gave PDA moments for the viewers. Ritesh was seen giving a peck to Genelia in front of everyone.He was seen giving Genelia a cozy hug at the launch. To which Genelia, became so excited that she started dancing.

The couple even spoke about them completing 20 years of togetherness soon in January 2023. The film is set to release on 30 December this year.