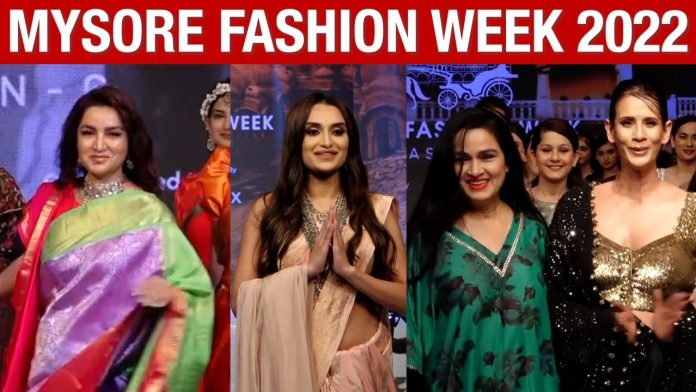 In India marriage is the biggest festival, it is celebrated in every region of India.

In India there is no greater event in a family than a wedding, dramatically evoking every possible social obligation, kinship bond, traditional value, impassioned sentiment, and economic resource.

In the arranging and conducting of weddings, the complex permutations of Indian social systems best display themselves.

It contained, the collection of dresses for both girls and boys. These dresses were presented by well known models. By wearing these dresses models presented different view of marriage, theme and indowestern fusion .

Here after completion of Fashion show Prashant Majumder said that it was the first time where he visited Mysore . As in south it was his first show and he also said that he had tried his best , now it’s on audience whether they are liking it or not.

On being asked for how did you come up with this idea? he replied that , ” As I travel all over India I have seen that now a days girls want such outfit for wedding that they can wear them even in other function i.e, other then wedding like engagement, sangeet , haldi etc , so here I have tried to make dress like that “. And here he also said that now a days girls are liking barbie gowns , barbie lehengas so his oufits were made keeping all this things in mind .

He gave western dresses an Indian look so that anyone can wear it and dresses made by him were made in pairs i.e if lehenga is of green colour then he had green coloured sherwani also so that girlfriend- boyfriend , husband- wife etc can wear it by twinning .

Ramya santhosh also presented outfits designed by her . Tisca Chopra talks about her silk saree look designed by Ramya at Mysore Fashion Week 2022 after ramp walk as the saree wore by her took months to design by her designer as the embroidery made on saree was made by hand and so beautiful.

South Actress Gayathrie was on fire while Ramp Walk at Mysore Fashion Week 2022.