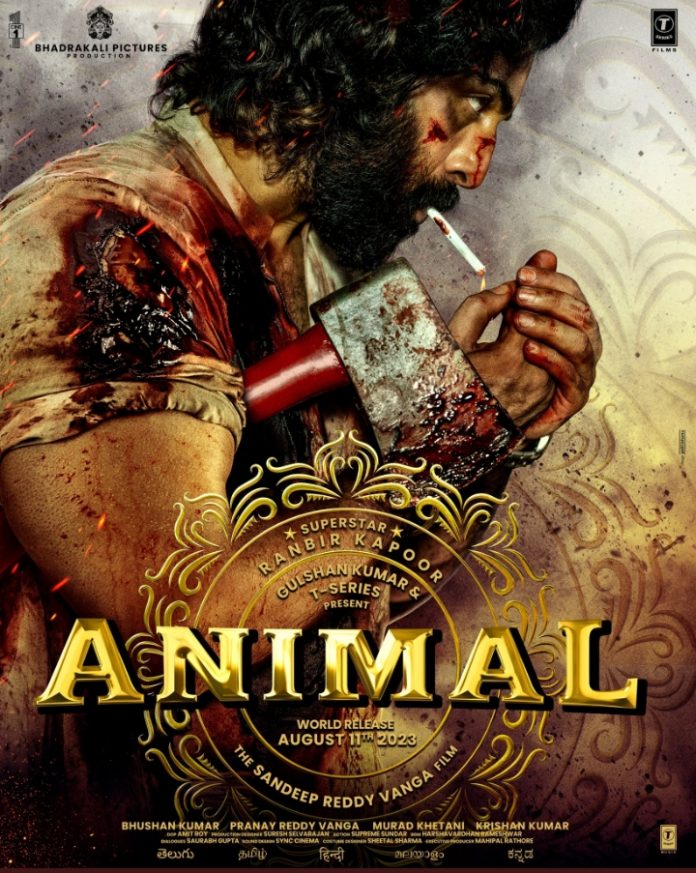 Covered in blood, spark in the eyes, cigarette in mouth and Axe in hand full of red blood, just have a look on such dangerous look of Ranbir Kapoor. Such great show of Ranbir Kapoor is from his upcoming movie “Animal”.

After seeing this poster atmosphere has become tremendous and after seeing Ranbir in the poster it can be clearly anticipated that peoples are going to rain tremendous money on him.

Yes, Ranbir Kapoor gave a wonderful treat on the occasion of new year to his fans as he has shown the poster of his most amended movie. In the poster his side look is clearly visible, with long beard… long hair…. anger on the face in which he is looking like action fighter in complete violent look.

Fans will see Ranbir’s action in this movie same as they saw in his movie ‘Shamshera’.

Film makers have made fans more excited by sharing this poster through their social media account. However Ranbir’s look of this film is being compared with his look in Shamshera. Fans will be seeing his intense look in Animal as they saw in Shamshera.

But ‘Shamshera’ bombed badly at the box office, whereas excitement among fans for watching “Animal” movie is much. Also Ranbir has blockbuster movies like Brahmastra in his account.

It is also being anticipated that this film will become as hit as ‘Brahmastra’ or may also break all the records of Brahmastra and will involve in the club of 500Cr.

Film makers are also super excited and confident for the film. Poster is being loved so much on social media .

It doesn’t requires a day’s hardwork , it takes years to make a poster of film, teaser, trailer, songs, film etc this all has been shared by the post made by Shivoham in which he told that since 2yrs they started training.

Film is directed by Sandeep Reddy Vanga and will be released on 11th August so makers has so much time in order to promote the movie by releasing poster, teaser, trailer and songs.

So what do you think whether this film will go ahead of Brahmastra and involve in the club of 500 Cr by making this year also in his own name.