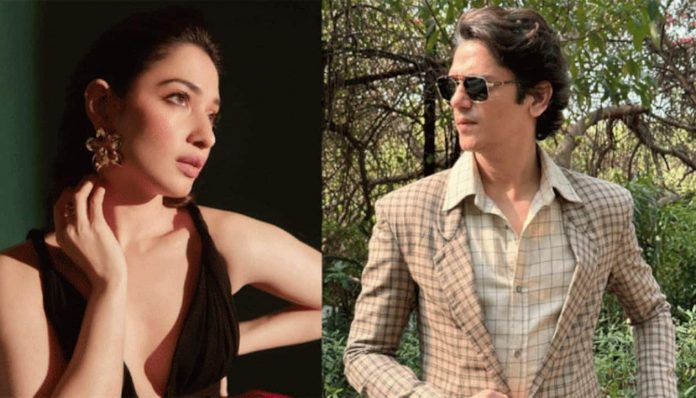 A darling has entered Tamanna Bhatia‘s life. Yes here I am talking about Vijay Varma who has entered in Tamanna’s life. Nowadays affair is the talk of the B town.

Bahubali fame, Tamanna got darling ‘Vijay Varma’ in real life.
Vijay Varma and Tamannaah Bhatia seem to be making their relationship official in the new year. The actors were seen embracing one another as they celebrated the New Year in Goa. Tamannaah was dressed in a short glittering pink outfit while Vijay was wearing green shorts with a white shirt.

The new couple has surprised some fans with their relationship. On Reddit, a few users were happy for the new couple. One user wrote, “Now this is a love story I am rooting for.

Rooting for you girl- Tamannaah!” While another claimed, “Vijay Verma is dating a goddess.” Others called Vijay ‘lucky’ and yet another fan shared, “Wow they’re really open, guess they don’t plan on keeping their relationship hidden.”

While some are commenting on their relationship.

Tamannaah made her acting debut with Chand Sa Roshan Chehra (2005) opposite Samir Aftab and has been working in the Telugu and Tamil film industries since then. She is mostly known for her role as the warrior Avantika in SS Rajamouli’s Baahubali films.

In 2022, she was seen in a number of Telugu and Hindi films including Ghani, F3: Fun and Frustration, Babli Bouncer, Plan A Plan B and Gurthunda Seethakalam. This year, she will star opposite Nawazuddin Siddiqui in Bole Chudiyan.

Vijay, who graduated from the Film and Television Institute of India, made his feature film debut with Chittagong in 2012. He is also known for his work on the films Pink, Monsoon Shootout, Manto, Gully Boy and the Ghost Stories anthology.

In 2022, he appeared in the films Hurdang and Darlings, picking up acclaim in the latter for his role as an abusive husband in the Netflix film. Vijay will next be seen in Sujoy Ghosh’s The Devotion of Suspect X with Kareena Kapoor and Jaideep Ahlawat.