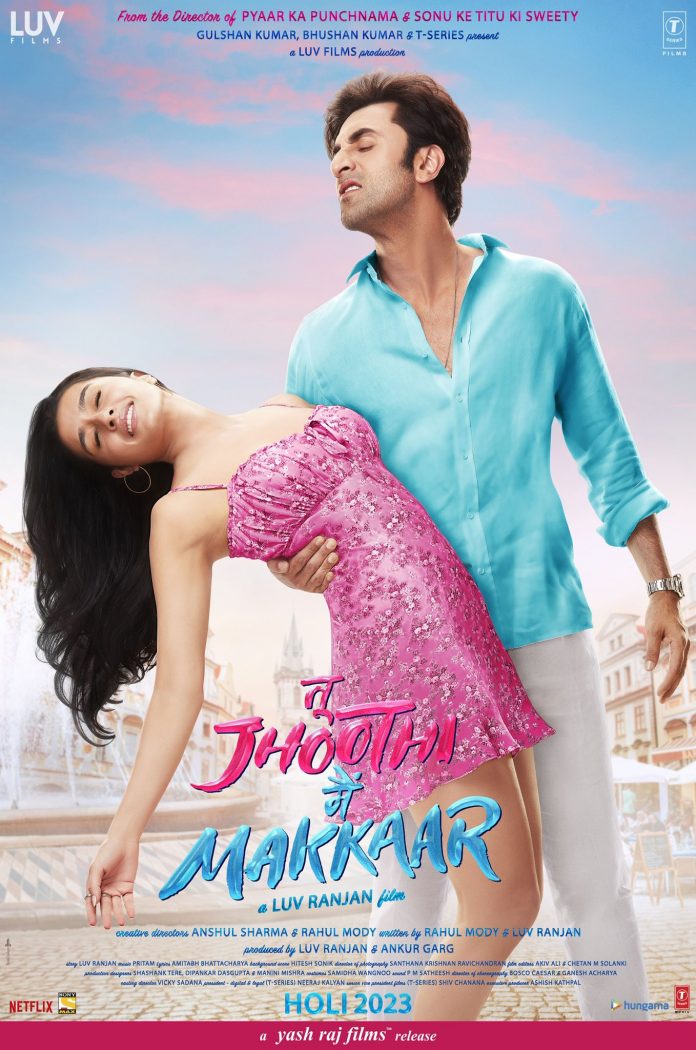 Tu Jhoothi Main Makkaar, an upcoming Indian Hindi-language romantic comedy film directed by Luv Ranjan. The film is written by Ranjan and Rahul Mody, and produced by Luv Films and T-Series Films. It stars Shraddha Kapoor and Ranbir Kapoor, alongside Dimple Kapadia and Boney Kapoor. The film is scheduled for theatrical release on 8 March 2023.

The trailer of the Ranbir Kapoor-Shraddha Kapoor-starrer ‘Tu Jhoothi Main Makkaar’ will be released in theatres with Shah Rukh Khan’s ‘Pathaan’.

The upcoming film is directed by Luv Ranjan, who is known for his movies such as ‘Pyaar Ka Punchnama’ and ‘Sonu Ke Titu Ki Sweety’.

In the poster of the film, Ranbir can be seen holding Shraddha in his arms. It is a rom-com and the grapevine has it that this trailer will be attached to Pathaan by YRF, who are distributing both films.

Ranbir is also occupied with his next film ‘Animal’. He is right now enjoying his fatherhood and he is often spotted with his wife Alia Bhatt.

Unlike ‘Animal’ which is a gangster drama, his film ‘Tu Jhoothi Main Makkaar’ is for all age groups.

‘Tu Jhoothi Main Makkaar’ is directed by Luv Ranjan, produced by Luv Films’ Luv Ranjan and Ankur Garg, presented by T- Series’ Gulshan Kumar and Bhushan Kumar. It is all set to release worldwide in cinemas on Holi 2023.