‘Trial By Fire’: Trailer of Netflix series on Uphaar Cinema tragedy out 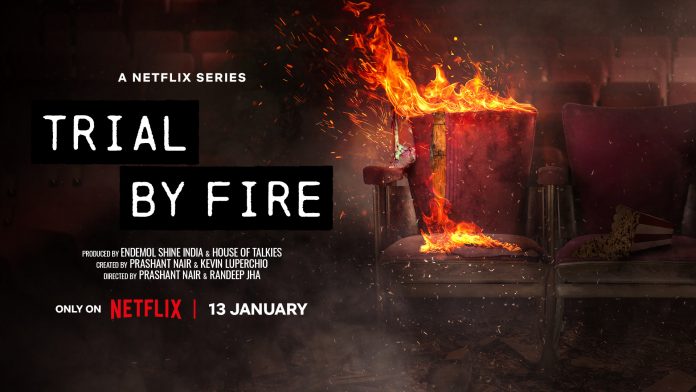 The Uphaar Cinema tragedy happened in June 1997, which saw the loss of 59 victims and 100 injured film-goers as a fire took over the cinema theatre in South Delhi. The tragedy is one that has been etched in the minds of many for over two decades.

Trial By Fire web series captures the heartbreaking journey of parents Neelam (Rajshri Deshpande) and Shekhar Krishnamoorthy (Abhay Deol), who lost their two children to the 1997 Uphaar Cinema fire in Delhi. The limited series depicts their endless trials and tribulations in the pursuit of justice over 24 years, while also looking at the other lives touched and destroyed by the fire.

Inspired by the bestseller book, Trial by Fire: The Tragic Tale of the Uphaar Fire Tragedy by Neelam and Shekhar Krishnamoorthy, the new series is showrun by Prashant Nair, who has adapted the book to screen with Kevin Luperchio and also directs the series with Randeep Jha.

Produced by Endemol Shine and House of Talkies, the human drama series premieres on the platform on 13 January.

Earlier, Prashant Nair had called Neelam and Shekhar Krishnamoorthy as “inspiring examples” of the kind of resilience and fortitude it takes “to move the needle even slightly in this country.” “What happened to them and the way they have been forced to fight for justice is truly horrific and, unfortunately, there are countless other people today in similar situations. We are grateful to Netflix for being such courageous partners in telling this story,” he had said.