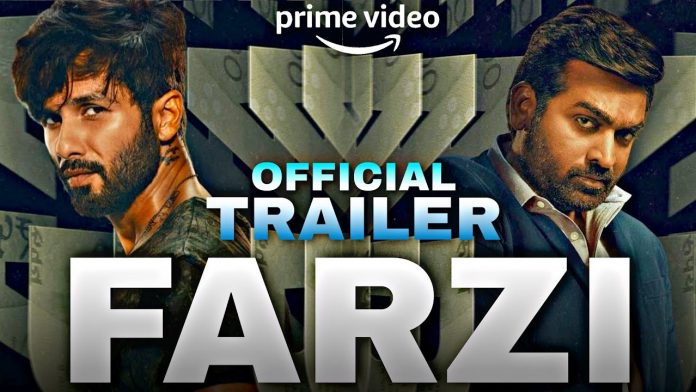 Kickstarting thenew year on abig note, Prime Video today announced that its highly anticipated Original, Farzi, will premiere on February 10 in India and in more than 240 counties and territories worldwide.

Farzi is the next sries from the acclaimed creators of the blockbuster, The Family Man. Produced under Raj & DK’s banner D2R Films, the star-studded show marks the digital debut of Bollywood heartthrob Shahid Kapoor and Kollywood’s most loved star Vijay Sethupathi.

Farzi features a line-up of ensemble star cast including Raashii Khanna, Kay Kay Menon, Amol Palekar, Regina Cassandra, and newcomer Bhuvan Arora in pivotal roles. Spanning eight episodes, Farzi is a fast-paced, edgy, one-of-a-kind crime thriller, with the director duo’s trademark humour, stitched around a clever underdog street artist’s pursuit to con the system that favours the rich. What ensues is a thrilling cat-and-mouse race between him and law enforcement where losing is not an option. Along with Raj & DK, the series is written by Sita R Menon and Suman Kumar.

Shahid Kapoor, who was last seen on the big screen in the 2022 film “Jersey” is all set to make his OTT debut soon. On wednesday, the actor took to his social media account to share the first glimpse of his digital debut series, ‘Frazi’.

Shahid Kapoor is all set to make a powerful start to his New Year with his OTT debut. The actor is gearing up for the release of his next action thriller Farzi alongside Vijay Sethupathi.On January 5, the makers of Farzi dropped the first look poster of Shahid and Vijay.

Vijay gives villainous looks as he holds a gun and looks at the camera. The film’s title has been given a unique design with Indian currency printed on it. On the other hand, Shahid looks fierce in his rugged outfit as he smirks and faces the camera.

Several fans took to the comments section of Shahid Kapoor’s video and wrote their reactions to the teaser. Shahid Kapoor’s OTT debut leaves social media intrigued One fan says, “Perfectionist to Perfectionist hota hai.” Another says , “2023 will be your year Mr Kapoor.”