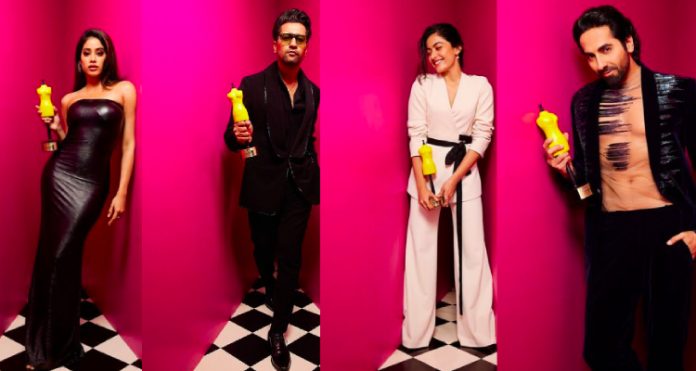 Bollywood is all about showiness, glamour and Dixieland that we see on screen. Every other day there is some party or award show or an event or something where we get to see our favorite stars grace the red carpet in their own looks. Every fashion enthusiast tries to dissect who wore what and which look impressed the most by fans or which one lost by one mark in the fashion game.

It seems award season is in no mood to take a break in bollywood , as almost everyday we see our favourate celebs attending a new award function . After Nykaa Femina Beauty Awards 2022 , The Grazia Young Fashion Awards , was held on 17th December 2022 in mumbai. The star-studded night paid homage to young and emerging designers, fashion labels, and celebrities who have driven a change with their talent and unique skills . Check out the celebrites who stole the hearts with their fabulous outfit and fashion sense

2) Faraz Arif Ansari and Priya Malik arrived the evening serving some serious lewks on the Pink Carpet at gyfa2022.

3) sharvari wagh gorgeous black backless bodycon dress in grazia awards . She is being trolled because of the outfit and being compared with Urfi Javed .

5) Babil Khan also made a dashing appearance at the event.

7) Janhvi Kapoor made a stunning appearance at the event in black bodycon dress.

8) Ishaan Khatter arrived in full energy for the evening .

10) Sobhita Dhulipala an Indian actress and model who works primarily in Telugu, Hindi, Tamil ,and Malayalam films was also present in the event and opted for a gorgeous black oufit and slayed the red carpet .

11) Rochell Rao, an Indian model and actress , host for the night was unable to keep herself calm to celebrate the young guns of fashion!

12) Tejasswi Prakash ,winner of bigboss season 15, opted for a shimmery blue gown for the evening .

17) Rashmika Mandanna , who has a big fan base in the country due to her acting skills and eternal beauty , was also present at the event. she opted for a simple yet chic white attire.

18) Bollywood’s ace fimmaker Karan Johar was one of the attendees of the evening , and he graced the event in a stylish outfit with shades on.