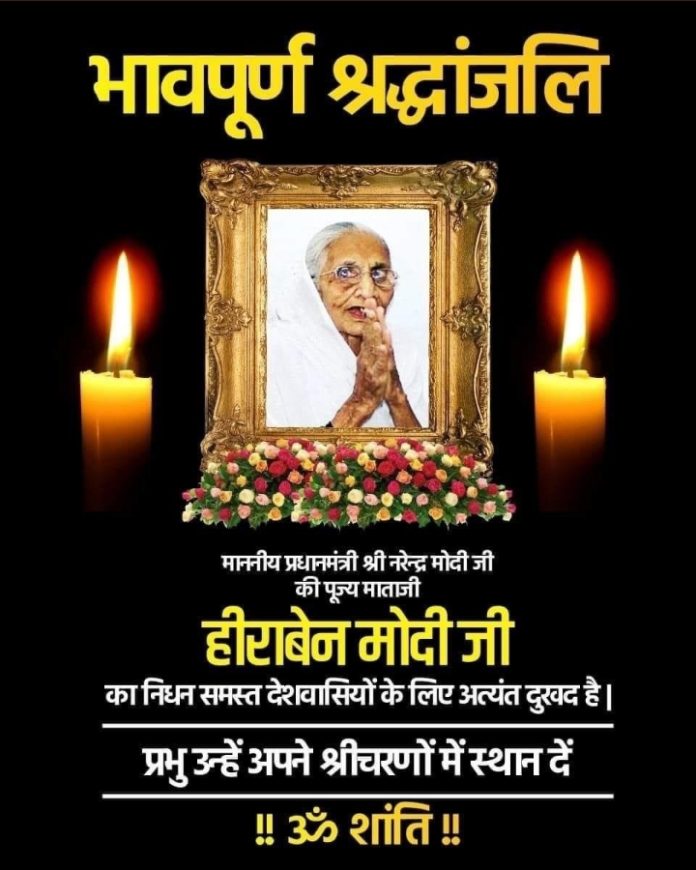 Prime Minister Narendra Modi’s mother, Heeraba, died at the age of 100 on Friday morning. She breathed her last at around 3.30 am.

She was admitted to U N Mehta Institute of Cardiology and Research Centre in Ahmedabad earlier this week due to health issues.

PM Modi arrived at the airport in Ahmedabad in the morning and went straight to the house of his younger brother.

After learning about her death, the Prime Minister reached the residence of his brother Pankaj Modi at Raysan village on the outskirts of Gandhinagar, where the mortal remains of their mother were kept.

Prime Minister Narendra Modi during the funeral procession of his mother Heeraben Modi, who passed away at the age of 100, in Gandhinagar.

PM Modi is seen giving shoulders to the mortal remains of mother Heeraben at her funeral procession in Gandhinagar.

Prime Minister Narendra Modi carries the mortal remains of his mother Heeraben Modi during her funeral procession, in Gandhinagar.

Prime Minister Narendra Modi inside an ambulance during the funeral procession of his mother Heeraben Modi, in Gandhinagar.

The mortal remains of Hiraben, Prime Minister Narendra Modi’s mother, who passed away here early on Friday (December 30), were consigned to flames at a crematorium in Gandhinagar, Gujarat.

PM Modi was slated to launch development projects worth over Rs 7,800 crore in West Bengal and flag off the Vande Bharat Express connecting Howrah and New Jalpaiguri later today. The PMO said he will attend the programmes through video conferencing after flying to Gujarat for his mother’s funeral.