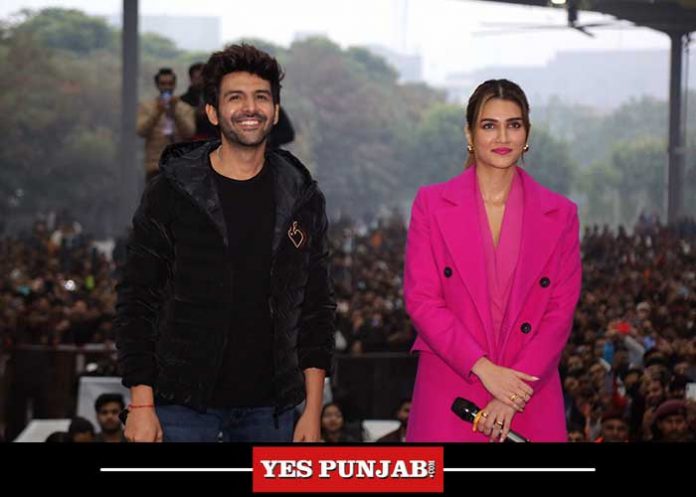 Bollywood actors Kartik Aaryan and Kriti Sanon reached Jalandhar with the team of Shahzada to celebrate Lohri and for the trailer launch of their film ‘Shehzada’.

The ‘Bhool Bhulaiyaa 2’ star shared glimpses from his ‘first Lohri’ in Punjab. He took to Instagram to share a video of all the festivities with the Shehzada team.

In the video, both Kartik and Kriti were welcomed with phulkari dupattas and a bhangra performance. In other scenes, they stood and prayed to the holy fire of Lohri. There are also shots of stage where another group performed bhangra.

No visit to Punjab is complete without hitting a roadside dhaba and gorging on “desi food”. Actor Kartik Aaryan did not miss this chance during his recent work trip to Punjab.
On Saturday, Kartik took to Instagram and shared a few pictures. In the pictures, he can be seen holding a hot glass of chai.

In another image, he gave a close-up of paranthas loaded with butter. He also dropped a picture of himself eating sugarcane.

It is a remake of the 2020 Telugu film ‘Ala Vaikunthapurramuloo’.

Apart from Shehzada, Kartik has Satyaprem Ki Katha lined up for this year and will also be seen in the third installment of Aashiqui. He also has Kabir Khan’s untitled story in his kitty.