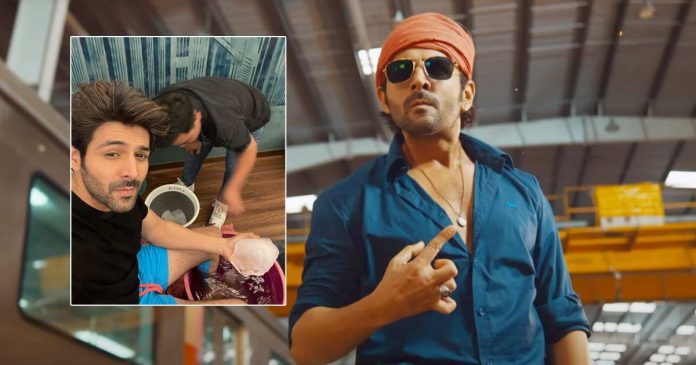 Kartik Aryan has recently shared a photo which took all the limelights.

Kartik Aryan shared a bad news with his fans. Nowadays, the actor is busy shooting for his film Shehzada.

While he’s shooting some action sequence in the film, he got injured. Kartik shared this news with his fans by an Instagram post.

In the photo shared by him, Kartik is seen sitting with his feet inside an ice-filled tub. There are blue patches on his knee which clearly reflects his injury.

It seems from the picture that he’s been going through stitching of the injury.

He was even holding an big piece of ice in his hand and was posing with it.

After sharing of the post, his fans started filling the comments with recovery messages.

Talking about the movie, Shehzada is the hindi remake of Allu Arjun’s Superhit Telugu film ‘Ala Vaikunthapremulu’ .

The movie is directed by Rohit Dhawan and has also Kriti Sanon opposite Kartik Aryan.