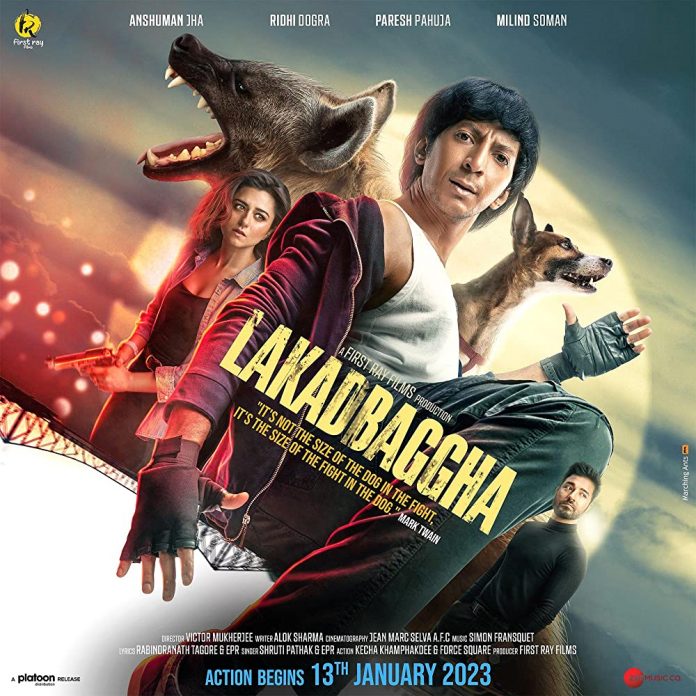 Lakadbaggha is an action-drama movie penned and helmed by Victor Mukherjee. The movie stars Anshuman Jha and Ridhi Dogra in the lead roles, along with Bijou Thaangjam, Murari Kumar, Paresh Pahuja, and many others in supporting roles.

The film’s soundtrack and background theme were composed by Simon Fransquet, and Jean-Marc Selva was in charge of the cinematography. Anushman Jha, Ridhi Dogra, Paresh Pahuja, and Milind Soman produced this movie under the First Ray Films banner. Lakadbaggha, a limited theatrical release, will be distributed by Platoon Studios.

The trailer of yet another vigilante film Lakadbaggha (hyena) is out, however, this time the hero is out to not save humans but animals.

Anshuman Jha, better known for his role in Love Sex Aur Dhokha and recently seen in Hum Bhi Akele Tum Bhi Akele, plays the lead – a martial arts trainer for kids during the day and an animal vigilante at night. He performs several hand to hand combat action scenes in the impressive trailer.

The trailer introduces us to Arjun, who fights for those who don’t have a voice, that is animals, especially street dogs. Police refuses to believe that it’s the work of one man as he mercilessly breaks bones of those who trouble animals.

A real hyena finally makes an appearance as Anshuman’s Arjun goes on to unearth an illegal animal trade industry and takes on animal trade kingpin, played by Paresh Pahuja.

Lakadbaggha will hit theatres on January 13, 2023.