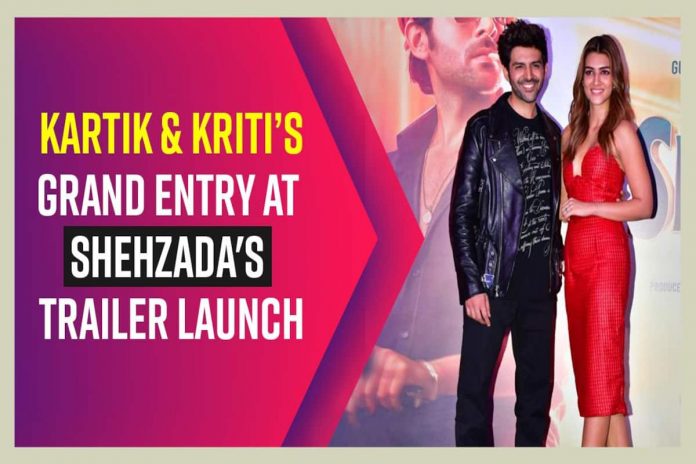 The trailer of Shehzada, which is an official Hindi remake of Allu Arjun starrer Ala Vaikunthapurramuloo, promises to be a masala entertainer which serves a good blend of action, comedy, emotions, drama and other ingredients.

The highly-anticipated trailer of Kartik Aaryan and Kriti Sanon starrer Shehzada is finally out! The lead stars of the film attended the trailer launch event held in Mumbai on Thursday (January 12). Kriti, we must assert, stole the show with her strapless red mid-length -hot avatar.

Bollywood actors Kartik Aaryan and Kriti Sanon, who attended their upcoming movie Shehzada’s trailer launch in Mumbai today, had a playful banter going on among them.

Kriti told Kartik during the event that he should allow other people to do movies and said, “kya saare films aap he karenge?”

In the viral video, Kartik looked at Kriti and said, “Aap itne saari filme kar rahi hai (You are doing so many films).” To which Kriti gave a witty reply and said, “Toh acchi baat hai, humko bhi karne dijiye. Kya saara aap he karenge (It’s a good thing. Let us also do movies, will you alone do all the films).” Kriti also added that Shehzada is a very special film for her.

Meanwhile, Manisha Koirala also shared a series of pictures and videos on her Instagram from the wrap-up bash.

Kartik Aaryan will also debut as a producer with Shehzada, and has joined producers Bhushan Kumar, Allu Arvind, and Aman Gill. Shehzada is set to release during the Valentine’s Day weekend i.e. on February 10, 2023.