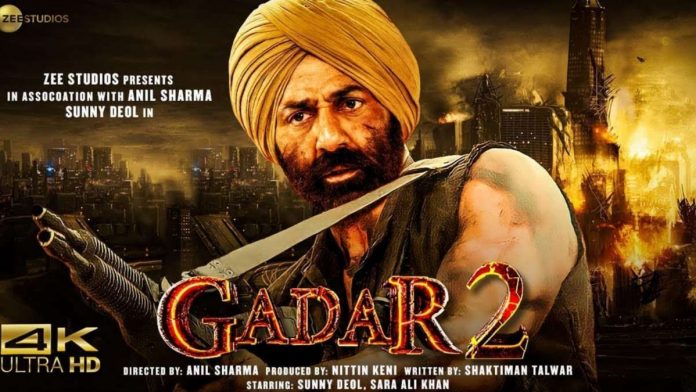 Gadar 2, an upcoming Indian Hindi-language Romantic period action-drama film directed by Anil Sharma. It is a direct sequel to the 2001 film, Gadar. The original cast, consisting of Sunny Deol, Ameesha Patel and Utkarsh Sharma, will be returning.

Sunny Deol and Ameesha Patel are once again coming to create ‘rebellion’ among the audience with the forthcoming part of famous movie Gadar: Ek Prem Katha that was issued in 2001 by the director Anil Sharma.

Recently ‘Gadar 2’ has been announced which will be full of action, drama & emotion with the same starcast. The first part was also full of action & emotional. The solid performance of lead characters, Sunny Deol & Ameesha Patel, was praised by audience as well as critics.

Gadar 2 is a following phase to the movie.
Earlier, The promo of film has been released which got lots of love and appreciation from the died heart fans of Sunny Deol. Now, the team has officially announced that the official poster and release date of the film will be announced on 26 Jan, 2023.

After 20 years, The director of the film Anil Sharma and Zee Studio has come together to give another massive hit. The film also stars Anil’s son and actor Utkarsh Sharma, who played the role of Sunny Deol and Ameesha Patel’s son ‘Jeet’ in ‘Gadar: Ek Prem Katha’.

In the latest poster, the doting actor is seen furiously holding a chartwheel in his hands, leaving behind all audience nostalgia. The director promised to keep magic alive in second instalment.

Fans are super excited for “Gadar 2”. This poster thrilled fans call it a goosebumps moment.