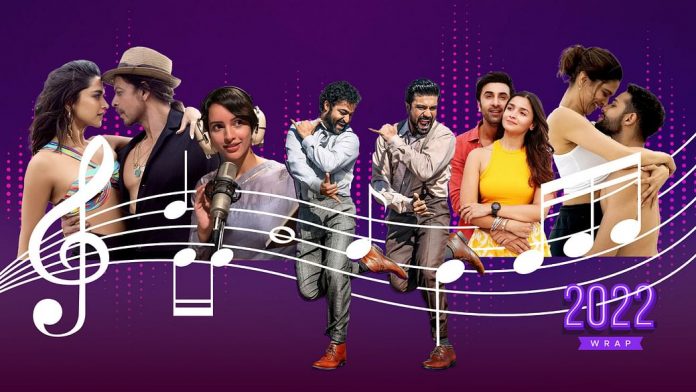 Bollywood and music always compliment eachother. Bollywood can’t be even imagined without music. In 2022 there were many songs which became super hit. It can also be said that the songs of flop films also became hit.

So just have a look on Top 10 hindi songs:

1)”Naacho Naacho” song of film ‘RRR’. Naacho Naacho song made many records and was nominated for many awards. Jr NTR and Ram Charan brought forth unmatchable energy in the song.

Fans loved their synergy in the song, due to which it became party favourite song. Hook step of Naacho Naacho became so popular that all were making reels on it.

3) Romantic song “Kesariya” of Brahmāstra, which was in trending. Alia and Ranbir’s chemistry in the song made it hit . 2022’s Hit romantic song ‘Kesariya’, which became much popular on internet.

5) Nora Fatehi’s glamour and chemistry with Sidharth remains the highlight of the song while both the actors look their glam best.

“Manike” song by Yohani Diloka, Jubin Nautiyal and Surya Ragunnathan became ‘Chartbuster’. Dance moves became so famous on internet that all made reels on it.

6) “Nach Punjaban” song of Jugjugg Jeeyo. This song always remains up in playlist of wedding and party. Varun and Kiara danced a lot in this song. Hook steps of song became viral on social media.

Kiara’s bold look in the song and sizzling chemistry of Kiara and Vicky made this song more famous.

10) “Jehda Nasha” song of ‘An Action Hero’ of Ayushmann Khurrana. Nora’s moves made everyone crazy. This song received good response from fans.