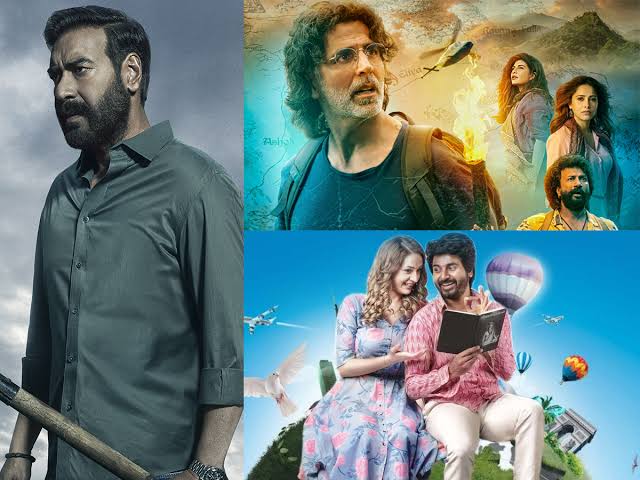 1)Drishyam 2 is a 2022 Indian Hindi-language crime thriller film directed by Abhishek Pathak, based on the 2021 Malayalam film of the same name, and a sequel to the 2015 film Drishyam, which in turn was adapted from the 2013 eponymous Malayalam film. Set seven years after the predecessor, the film stars Ajay Devgn, Tabu, Akshaye Khanna, Shriya Saran and Ishita Dutta.

Drishyam 2 has been watched by 7.54 million unique viewers on Amazon Prime gaining 1st position in TRP Chart of OTT Films.

The Drishyam 2 box office collection now stands at Rs 211.85 crore, with the movie collecting Rs 2.10 crore on its 25th day since its release on 18th November 2022. The film, directed by Abhishek Pathak, opened with a positive response, amassing Rs 15.38 crore on its opening day.

3) Glass Onion: A Knives Out Mystery is a 2022 American mystery film written and directed by Rian Johnson and produced by Johnson and Ram Bergman. It is the sequel to the 2019 film Knives Out, with Daniel Craig reprising his role as master detective Benoit Blanc as he takes on a new case revolving around tech billionaire Miles Bron and his closest friends.