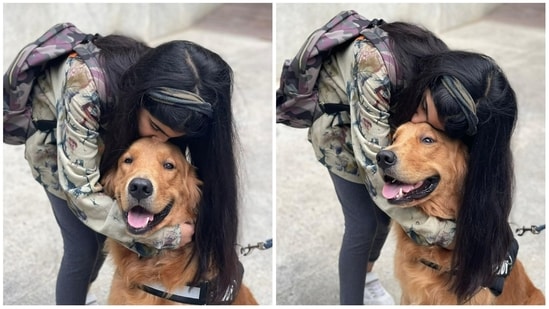 Twinkle Khanna has shared a heartfelt post featuring her daughter Nitara before leaving for the UK where she is pursuing a course in fiction writing.

Taking to her Instagram handle, Twinkle shared two adorable pictures of Nitara as she kissed their pet dog goodbye before leaving home. The first picture shows Nitara giving the dog a tight hug while the second picture shows her planting a kiss on its head.

Twinkle Khanna, who is pursuing a master’s in fiction writing from the Goldsmiths, University of London, has left for the UK with daughter Nitara.

Fans were moved to see Nitara share such a close bond with the furry animal. Fans commented beautiful comments on these photos. Some gave their blessings, while some said about the emotions coming out of photos.

Twinkle quit acting in 2001 after starring in a few films. She ventured into writing in 2015 with her first book Mrs Funnybones, later wrote a book titled The Legend Of Lakshmi Prasad in 2017 and followed it with another book titled Pyjamas Are Forgiving in the following year.

Twinkle and husband Akshay Kumar were recently in Goa with their kids Aarav and Nitara for their new year vacation. Aarav was recently spotted at the Mumbai airport as he headed out of the city.

Recently, Twinkle Khanna took a rickshaw ride with her daughter Nitara recently and shared a video f her outing on social media.

The actress revealed that she is a fan of rickshaw rides and as a teenager, her friends used to call her ‘Rickshaw Rani’.