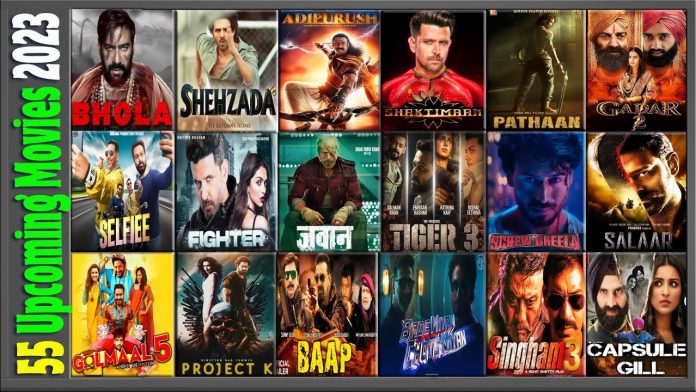 Hoping that 2023 will be good for the film world, as in 2022 films couldn’t do well. Now all are expecting that in 2023 films will really do well by seeing there amazing teaser or trailer as so many films ready to release .

Anyway 2023 will provide you variety of films from big budget to small budget , superstar’s film etc. So now just have a look on the films which are going to release from January to March:

Shah Rukh Khan back on silver screen with movie “Pathaan”, which will be released on 25th January. Before release only ‘Pathaan’ is stuck in controversies and is trending on social media. This movie is directed by Siddharth Anand with star cast Shah Rukh Khan, Deepika Padukone and John Abraham.

Evenif 2022 was bad for many big stars but for Kartik Aaryan it proved as very good as his film “Bhool Bhulaiyaa 2” became super hit movie of 2022. Kartik Aaryan and Kriti Sanon’s movie “Shehzada” directed by Rohit Dhawan will be released on 10th February.

2022 was proven good as well as bad for bollywood’s Singham as his movie “Drishyam 2” became super hit but other films couldn’t do well, now it will be interesting to see whether Maidaan can perform well or not.

Ajay Devgn’s movie “Maidaan” directed by Amit Sharma will be released in theaters on 17th February which is based on football.

Akshay Kumar and Emraan Hashmi’s movie “Selfiee” which will be released on 24th February.

“Mrs Chatterjee Vs Norway” in which Rani Mukerji will be in lead role by making comeback after 2 yrs in film industry, which will be released on 3rd March in theaters.

Ranbir Kapoor and Shraddha Kapoor’s movie “Tu Jhoothi Main Makkaar” in which they will do romantic comedy which will be released on 8th March. This movie is directed by Luv Ranjan.

Ajay Devgn and Tabu’s second film of 2023 “Bholaa” – an action thriller movie in which we will be seeing hit pair of Tabu and Ajay, which is directed by Ajay himself.

Now have a look on the movies that are going to release from April to June:

“Bawaal” which is an action drama, in which for the first time we will be seeing on screen chemistry of Varun Dhawan and Janhvi Kapoor which will be released in April 2023.

“Rocky Aur Rani Ki Prem Kahani” in which Ranveer will act as Rocky and Alia as Rani, it is directed by Karan Johar which will be released in theaters on 28th April.

“Adipurush” mythological film based on the epic Ramayana of Prabhas, Kriti Sanon, and Saif Ali Khan which is directed by Om Raut will be released in June 2023.

Ayushmann Khurrana and Ananya Pandey’s movie “Dream Girl 2” will be released on 23rd June in theaters.

Kartik and Kiara’s movie “Satyaprem Ki Katha” will be released on 29th June whose shooting is going on.

Now it will be really interesting to see whether the films that are going to release this year will perform well or not .